If you’re confused by Daylight Saving Time then you’re definitely not alone. On a biannual basis, people in many countries around the world have to turn their clocks either an hour forwards or an hour backwards under the notion of “Daylight Saving”.  Trying to read up on the topic never helps either and usually leaves you more confused than you started off. That’s probably why people have resorted to phrases such as “Spring forward, fall back” telling people to turn their clocks forwards in the spring and backwards in the autumn. Another common phrase is “March forwards” which is used to remind people in the Northern Hemisphere (such as the USA, Canada, and Europe) how and when to change their clocks.

But what IS daylight saving? On what date do we change our clocks? Are we changing it forwards or backwards? Does it save energy like I’ve heard? To answer such questions, let us first start by delving together into its history and see where it came from originally.

The History of Daylight Saving Time

In 1784, during his time as an American envoy to France, Benjamin Franklin published a letter in the Journal de Paris with the idea that Parisians economise on candles by the simple act of waking earlier. In this satire (which I highly recommend you read – after this of course), Franklin even suggested taxing window shutters, rationing candles, and waking the public by ringing church bells and firing cannons at sunrise. However, he never actually proposes the shifting of time that is DST.

The first person to do so was New Zealand entomologist George Hudson. His work shifts gave him time to practice his hobby of collecting insects and as such he quickly valued after-hours daylight. In 1895 Hudson presented a paper to the Wellington Philosophy Society suggesting a two-hour daylight saving shift.

Independently, British builder William Willet came up with the idea of DST in 1905 when he noticed that many Londoners slept through a majority of the summer’s days. Willet was also a keen golfer who hated cutting his rounds short at dusk. Two years later, he published his solution which was to advance clocks during the summer months. MP Robert Pearce liked the idea and introduced the first Daylight Saving Bill to the House of Commons on February 12, 1908. Unfortunately, the bill was denied. A young Winston Churchill even promoted it for a time and the idea was examined again by a parliamentary select committee in 1909 but again nothing was done. Sadly, Willett did not live to see daylight saving become law, as he died of influenza in 1915 at the age of 58. He is commemorated in Petts Wood by a memorial sundial, set permanently to daylight saving time.

The outbreak of WW1 made the issue into a pressing matter primarily due to the need to save coal. Germany and Austria-Hungary were the first two countries to adopt the idea of DST nationally, starting from April 30, 1916 (however, the very first city in the world to implement DST was Port Arthur, Ontario, Canada on July 1, 1908). Many European countries soon followed with Russia implementing it in the following year and the United States in 1918. After the war, many countries ditched the idea except for Canada, the UK, France, Ireland, and the US. It regained its popularity once more during WW2 and especially during the 1970s energy crisis where there was a shortage of oil and a spike in prices.

For countries that tend to observe DST, the clock observed during wintertime is named “standard time” which is the normal time as given by their time zone. During the summer, the observed time is named “summer time”.

The Rationale Behind It All

So far everything has been well and good. You now know where DST came from, but how does it work? How did it help countries save on coal during the war and energy during the crisis?

Well, simply put, societies come in two forms: Industrialised and Agrarian. An industrialised society defines time using a clock-based schedule that stays constant throughout the year. Your job starts at 8 am whether it’s currently January or June. The school bell will ring at 7 am sharp whether it’s March or November. On the other hand, agrarian (or agricultural) societies have their days defined by daylight hours. That means the number of hours they work will differ between March and November because the number of daylight hours is not constant around the year.

By synchronously moving clocks forwards by an hour, people governed by a clock-based schedule will now have to wake up an hour earlier than they usually would. This means that they get an extra hour of daylight after their workday activities. However, this also means they get one less hour of daylight at the start of each day – which makes the system less effective in winters.

If that was hard to follow, let me try explaining it differently. Picture a run-of-the-mill employee called Tom. Tom normally wakes up everyday at 6:00 am and finishes work at 5:00 pm. After moving his clock forwards, new Tom’s current 6:00 am waking time is actually 5:00 am for old Tom. Similarly, new Tom’s 5:00 pm is old Tom’s 4:00 pm giving new Tom an extra hour to enjoy the day before the sun sets.

“All that is Well and Good. But, When Do We Shift Our Clocks?”

Well… that’s not very straightforward to answer. There is no single day that all countries shift their clocks in. Even individual countries don’t have specific days where they shift their clocks annually. Political factors tend to come into play – as they tend to do in everything, take the United States for example. The Universal Time Act of 1966 declared that DST lasts 6 months (before 1966 it was locally decided); this period was then extended in 1986 to last 7 months and once more in 2005 to last 8 months. The latter extension came about by lobbyists from the candy industry who realised that customers tend to buy more candy during the day and as such wanted Halloween to be included in the DST period to make a higher profit.

To complicate the already convoluted system, the time of year and direction of the shift differs depending on whether you are in the Northern or Southern Hemisphere. As previously mentioned, countries in the Northern Hemisphere follow the saying of “March forwards” which means shift the clocks one hour forwards in March and then bring them back around November – when DST usually ends. This means that for the duration of their summer, the clocks are 1 hour ahead. Between March and November, it is currently winter in the Southern Hemisphere and countries are getting ready to go into daylight saving mode during November meaning that they follow the opposite of the saying.

If you’d like to fry your brain further, which I do not recommend but do so at your own risk, imagine setting up an international meeting between Toronto, London, and Sydney during the month of March. This task is already very difficult to do as it is not easy to find a time suitable for all three countries. Taking London as the central time zone, Toronto will be 6 hours behind and Sydney will be 11 hours ahead. Fast forward to the second week of March where Toronto decides to enter DST making it 5 hours behind London instead. Fast forward another week and London will now be entering DST. The time differences are now as follows: Toronto is 5 hours behind London, Sydney is 10 hours ahead of London. Now fast forward two more weeks and surprise surprise, Sydney is now leaving DST as it’s on the opposite side of the Earth making it only 9 hours ahead of London. Confused? As should you be.

I guess the main takeaway here is that never try to make a group meeting between Toronto, London, and Sydney during the month of March.

“So Is DST Worth All This Headache?”

The main idea of DST was that with more daylight hours, people would use less electricity as they would not need to switch on light bulbs. However, as technology has advanced, the incredibly inefficient tungsten light bulbs have evolved to LEDs which use 80% less power and give off better light. Thus the main source of energy drainage has shifted from tungsten light bulbs to other devices that tend to be switched on all day. One such device is air conditioning which tends to be switched on all day in places with extremely hot summers. Phoenix, Arizona is a prime case study for this. 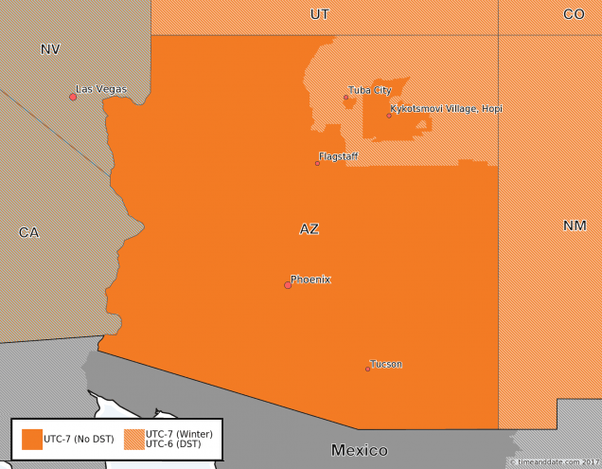 In Phoenix, the average summer high is 42oC with a record of 50oC (that’s 107oF and 122oF for the imperially civilised). So to ask the citizens of Arizona to move their clocks forward an hour during the summer to spend more time in the sun will only end up with them laughing you out of the room. It also means that Arizonans will have their air conditioning on regardless of the time of day and as such, there is no point in changing the clock. This is why Arizona is one of two U.S. states that do not follow DST (with Hawaii being the second due to their weather remaining tropical all year). Well… most of Arizona, to make this easier on both you and I, simply look at the image on the side. The parts in orange do not follow DST and are always at UTC-7 (or GMT-7). The parts in the more pastel shade are at UTC-7 during the winter however during the summer they shift to UTC-6 as they observe DST. You will very quickly notice that within the DST-observing region, there exists an area that doesn’t follow DST. And even within that area is another smaller area that observes DST. If you draw a straight line going through all these regions and walk along said line during the summer, you’re going to have to change your clock at least six times!

There also seem to be quite a few drawbacks associated with DST. Many studies have been done about the first Monday after changing time – as countries tend to shift at midnight Sunday which means that people get one less hour of sleep that night. Researchers found that on the first Monday, there are 25% more heart attacks than the average Monday as well as 17% more car accidents and 6% more workplace accidents. RescueTime (an automatic time-tracking software) estimates an astounding $480 million lost in productivity for knowledge workers.

“So Where Do We Go From Here?”

Well to review, DST came about in the late-19th and early-20th century. It gained major traction during the 20th century due to the World Wars and the 1970 energy crisis. But technically, all DST does is give you an extra hour of daylight after your workday. This may or may not be beneficial depending on where you live which would explain why some countries (or individual states) tend not to follow this. DST might not even give the same benefits that it used to because of advancements in tech. Nevertheless, if one thing is certain when it comes to DST is that it takes something that should be very simple and turns it into an obnoxiously complicated topic.