The COVID-19 pandemic has undoubtedly brought tremendous challenges for governments around the world, from having to promote social distancing to reevaluating potential budgetary divisions. After many major shocks to most markets and months of staying indoors, is it safe to assume things will return to normal soon?

Unfortunately, the pandemic bears one more curse. Due to the complete devastation of the routines we took as granted and other factors like lack of complete adaptability in our systems, everyone has been impacted. Consumer confidence has plummeted. Governments have exhausted their budgets trying to keep their populations fed and healthy. Investors have withdrawn from world markets, and many businesses are closing their books for the final time with little hope of continuing. These are all major indicators of the forthcoming recession. The International Monetary Fund has gone as far as to declare that this is to be the worst economic downturn since The Great Depression in 1929. Global economic growth has been projected to fall from 2.9 per cent in 2019 to as low as -3.0 in 2020. In addition, it was stated that the total global GDP loss between 2020 and 2021 would potentially be around 9 trillion dollars, greater than the economies of Japan and Germany combined.

To add to this, though both the 2008 and 2020 crisis were indeed caused by very different reasons (the former the effects of a credit crunch in Western financial markets and the latter being the fall in the closure of businesses in a bid to curb the spread of COVID-19), they still hold many parallels. For example, in 2008 the Bank of England, like most other governing central banks around the world, had interest rates on a declining trend and fell to 0.5% by the end of the first quarter of 2009. Similarly in 2020, the interest rates have fallen to an all-time low of 0.1%. Observing that any additional action in this direction could lead to a liquidity trap (which means that any changes in the monetary policy – interest rates – beyond a certain point will become ineffective), governments have very few options on how to approach the after-effects of the crisis. These similarities are also useful in understanding the scale of the threat and helping us make fair estimates on what other important metrics – like the suicide rate and crime rate – may look like in the upcoming recession.

Leaders of the developing world are faced with concerns about how to maintain sufficient economic activity and keep its populations safe and indoors to “flatten the curve”. Countries have amassed enormous levels of debt from international organisations such as the World Bank and other lending countries to empower themselves just enough to lower the immediate threat to endurable levels and support daily wage earners in ways that allow them to stay at home. However, it has not gone unnoticed that interest on this debt has grown and will continue to grow, slowly spurring a debt spiral for the already heavily indebted nations.

One leader at the World Economic Forum in May conveyed his concerns for the Indian subcontinent and added:

“We are all connected and the response has to be global.”
-Imran Khan, P.M of Pakistan

The “response” in reference is a form of aid known as Debt Relief. 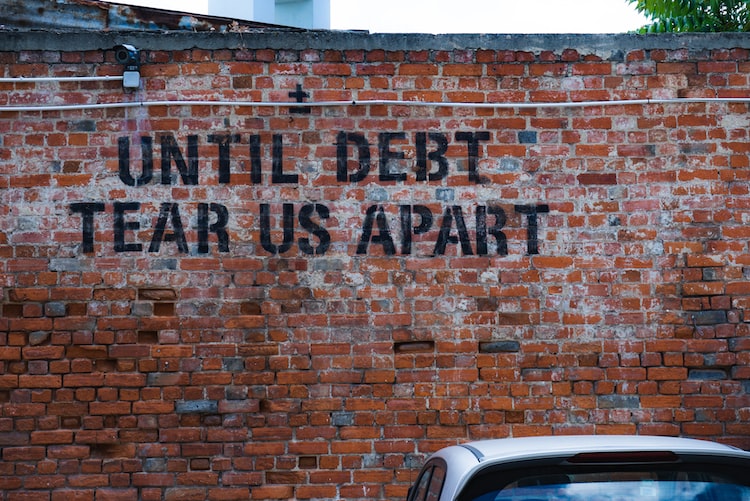 A standard understanding of debt relief, as the name suggests, is the easing of loan obligations to the borrower party by decreasing, deferring or completely dismissing any sum of payments owed.

The IMF, World Bank, and G20 have come together and devised a COVID-19 debt relief action plan that allows poor and vulnerable countries to defer payments that would have been due in 2020 over 4 years. So far 41 countries have applied for the G20’s Debt Service Suspension Initiative and analysts believe that a total of 73 of the most vulnerable countries could be eligible to shelve payments of up to $11.5 bn.

The deferring of developing nations’ debt obligations would go a long way towards helping them strengthen their budgetary position. This would free up state finances and allow nations to carry out an expansionary fiscal policy that would help stimulate and maintain sufficient economic activity, minimising or mitigating the negative effects of the greatest recession since the turn of the millennium.

Sub-Saharan Africa and the Indian subcontinent have been listed amongst the regions most threatened by the pandemic and its recession. However, at the same time, these are also the regions in which the debt relief process would be required to be most transparent. This is because of concerns regarding corruption as identified by Transparency International, which may lean towards corrupt politicians finding ways of siphoning off more revenue from the relatively larger disposable government budget.

Leaders around the world are not enthusiastic towards the proposed debt relief package. Approximately 300 leaders and lawmakers worldwide argue that the debt has to be cancelled and delaying payments for a year is simply insufficient. A year can not sufficiently contribute to the compensation of the worst economic growth in decades.

It is further added that if debt relief is to be effective, citizens must be able to see that their governments are spending the money saved in the public interest, including healthcare, education and welfare payments. In addition,  holding leaders accountable for the mismanagement of resources and corruption is also necessary. No government can be trusted to expend public funds effectively without sufficient oversight. This only fortifies the importance of transparent debt relief to these people.

On the other side of the coin, some leaders and businesses such as American credit rating agency Moody’s have argued against debt relief as a whole. They take the view that their survival is at stake when the money they are due to receive is delayed. Moody’s, which is involved in credit ratings, researching, and analytics, has come out supporting this view. They claim that such debt payment deferrals hold a risk to private creditors, and took action against 5 countries that have applied for the scheme. The primary argument is that investors will lose out on investments in the country’s bonds due to the G20’s request to the private sector for significant contributions. Moody’s has shown that one country alone has deferred debt payments of over $2.5 billion.

The claims prompted the United Nations’ Department of Economic and Social Affairs to intervene and undermine Moody’s assertions by explaining how debt relief would instead improve a country’s debt sustainability. UN DESA argues that by deferring debt payments to economically distressed nations, the likelihood of these nations paying back the money they owe to investors is higher. This increases the amount of money investors would receive back in the long run through ameliorating the economic position of the distressed developing nations. They stated that borrowing countries should come out of the programme with stronger credit than if they had not participated.

In addition to all of the above, the reason why debt relief should be the preferred approach is that it indirectly decreases the wealth gap between countries. This is done through the use of temporary injection instruments (the extended loan period which temporarily increases the time which a country can hold onto its finances) on lesser economically developed countries and temporary withdrawal instruments on more developed countries (The relatively long wait for getting their money back into circulation). Although this does not directly decrease the real output gap between countries, it allows the poorer country to use their resources for longer. Countries may also potentially create new income streams by investing and stimulating real demand by increasing government spending or improving the countries allocative potential by using supply-side instruments and supporting the rise of new competitive industries. Moreover, debt relief has very minimal negative effects in the long run as borrowing countries do not have to worry about high-interest rates because they are intentionally kept very low during the extension periods – as is their purpose.

With all these needs of different economies, and only so little available resources to satisfy them, the Basic Economic problem returns to challenge the weight of the opportunity costs that debt relief diminishes within modern-day capitalism. Can we come to a solution that doesn’t involve debt relief but instead more efficient global management to ensure that the effects of the recession are minimised? Economists and governments around the world must quickly come up with solutions tailored to all different types of communities and act as catalysts for the recession’s end, for which we should all brace. However, the most important question here is, could this be a perfect opportunity to significantly rebalance equality while also taking care of the pandemic’s aftereffects? A perfect two bird and one stone scenario that allows us to benefit from what could be a once in a lifetime opportunity.

Image attributions (in order of appearance)

(2) By Ehud Neuhaus on Unsplash